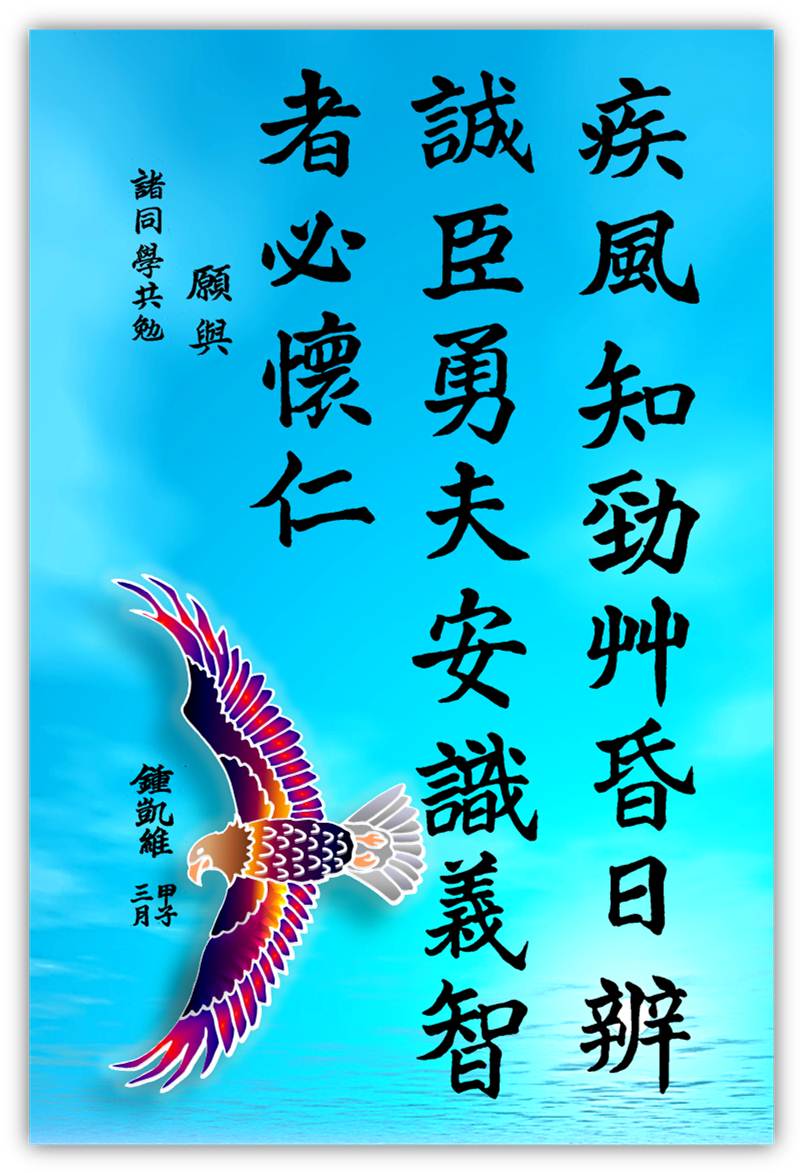 Only the strong and sincere can bear hardship and turmoil.
Only the wise and valiant can know righteousness and cherish benevolence.

💨疾風知勁草🌾
昏日辨誠臣
勇夫安識義
智者必懷仁
Calligrapher: 鍾凱維
The art of Chinese Calligraphy (書法) is akin to writing traditional Chinese characters with a paintbrush. It is a very difficult skill to master, often requiring ten years or more for one to become a decent expert.

疾風知勁草 昏日辨誠臣 勇夫安識義 智者必懷仁 is a Chinese poem that has existed for more than one thousand and three hundred years, and is available in several variations.

The first line of the poem, “ 疾 風 知 勁 草 ”, literally meaning “ Strong wind knows tough grass. ”, has already existed as an idiom (a phrase or expression with a figurative, non-literal meaning) as early as 23 AD. It can be translated more freely into English as “The storm puts strong grass to the test.”, conveying that one’s true colours are revealed after a severe or daunting test.

The third line, “ 勇 夫 安 識 義 ”, rhetorically asks “ How can brave men ever know rectitude? ”, declaring that one’s sense of justice and morality is beyond mere bravery.

The first half of the poem begins with a metaphorical proclamation that only the grass that can withstand the force of an intense gale is truly known to be strong. It then intimates that only in times of sociopolitical turmoil can a person in office be identified as a loyal minister or an honest statesman. The second half of the poem asserts with a rhetorical question that people who exercise courage without wisdom are just brave men who do not know righteousness at all. It concludes that only those who are both wise and brave can truly possess benevolence and righteousness, for they have genuinely comprehended what kindness and justice are.

The whole poem edifies us that only the strong and sincere can bear hardship and turmoil; and that only the wise and valiant can know righteousness and cherish benevolence.